In the interior of Angkor Wat Temple, particularly the two ponds flanking the causeway is an excellent place to capture the sunrise. 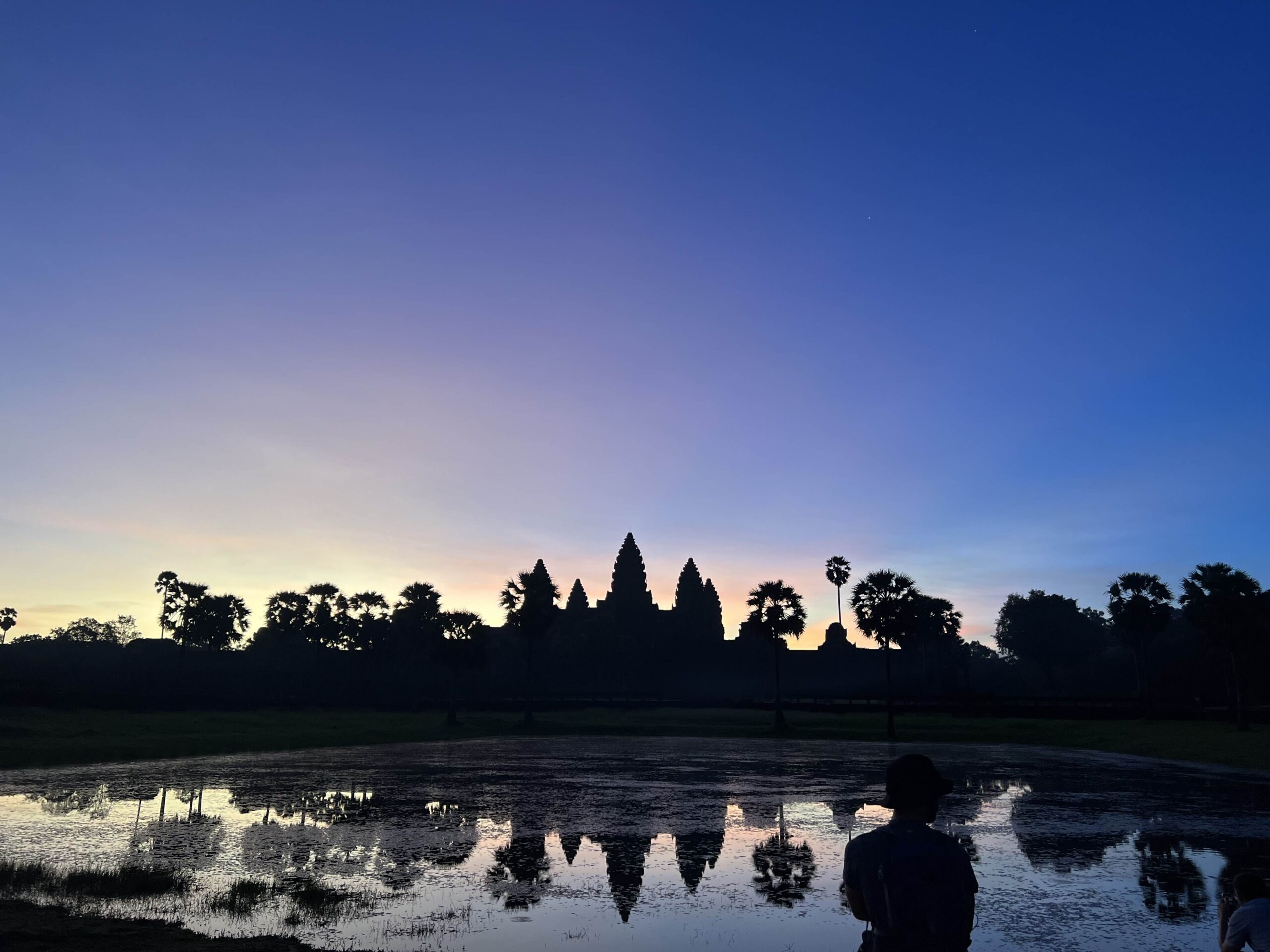 Here, it is the place where all the tourists always stand with tripods to catch up with the sun appearing. Before a Covid time, in here used to install almost a thousand tourists waiting for sunrise.

So very less opportunities to see sunrise reflected in the pond. For now, we would like to recommend to others places that you could in the peaceful one.

Should we purchase the temple pass in advance or right away?

You should buy a ticket in the evening time before the day tour. Because if you buy it on the day tour, you need to wake up at 4:30 am. If already bought only 5:00 am.

The ticket office is near the Angkor Panorama Museum on Siem Reap’s 60th road, from Jayavarman VII Hospital is 3 kilometers away. There are two options for purchasing tickets: online or at the booth.

Please visit the official website to get the most up-to-date information on the temple pass; we’ll merely show you the pricing for now.

Where should we go to see the sunrise around Angkor Wat? 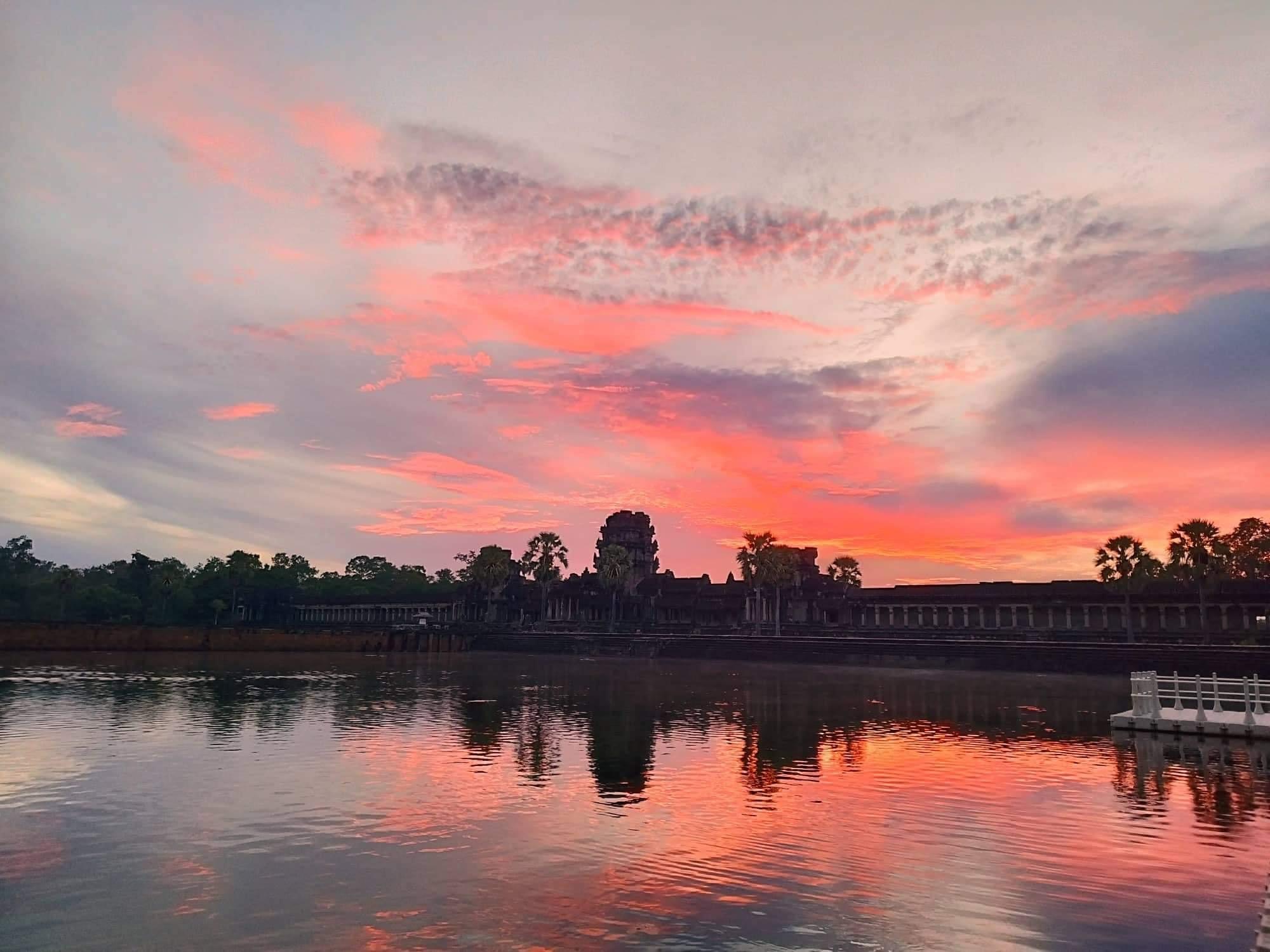 Sunrise outside of the Angkor moat along the floating bridge.

Sitting here allowed you to enjoy the magnificent sunrise reflected in the moat. The moat measures 1.3 km by 1.5 km. 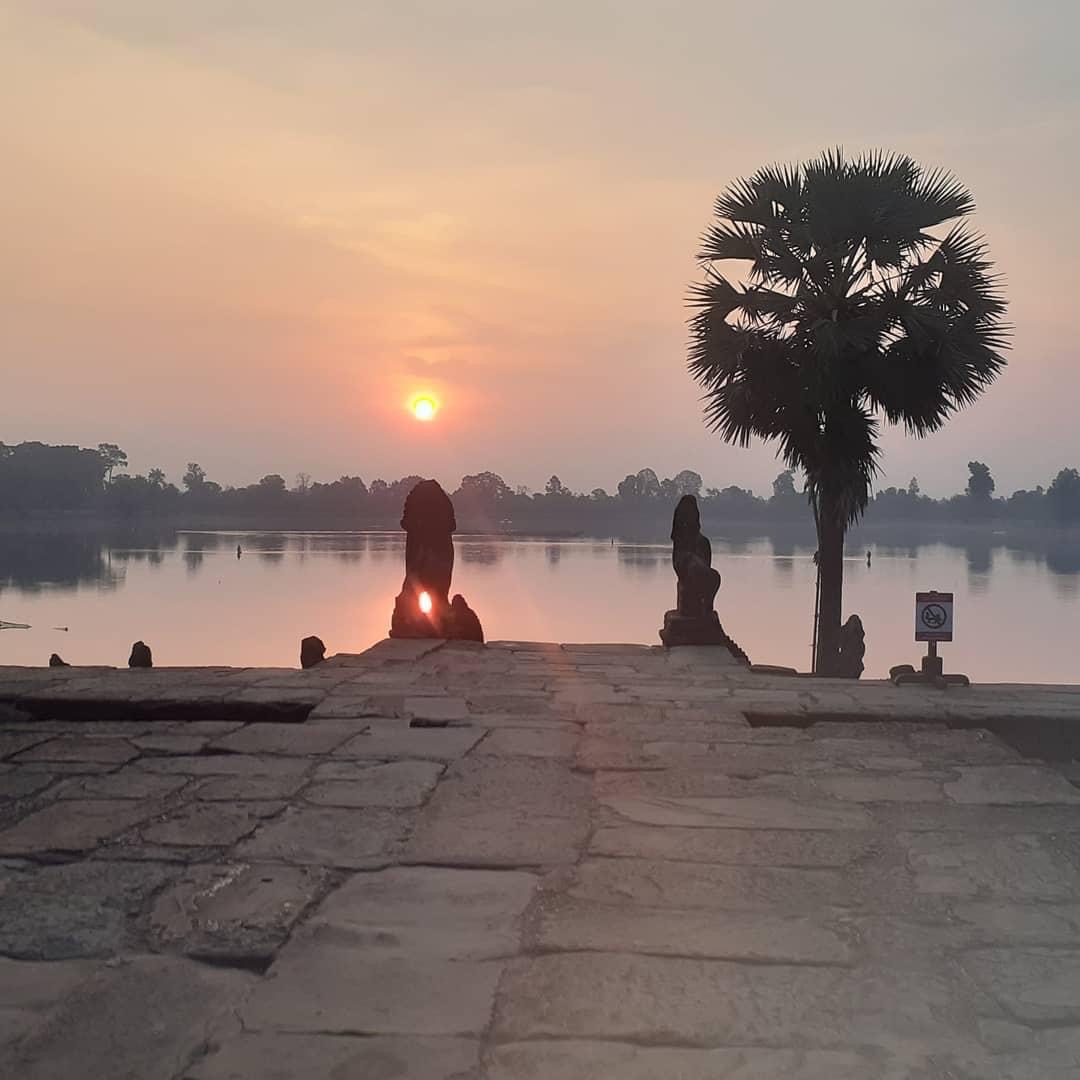 Located 6km from Angkor Wat to the eastside. Srah Srang is a baray or reservoir in Angkor. It was built by the king  Rajendravarman II during mid-10th century. And re-edited by king  Jayavarman VII during the end of 12th century

How to Ride a Bike to See Angkor Wat and Other Major Temples?

Cycling is the greatest way to view everything in Angkor Wat at your own pace. Pedal the tracks less traveled to avoid the throngs, congested roads, and quiet good tourist trails of Angkor.

Here you could know before to Angkor Wat by bike. 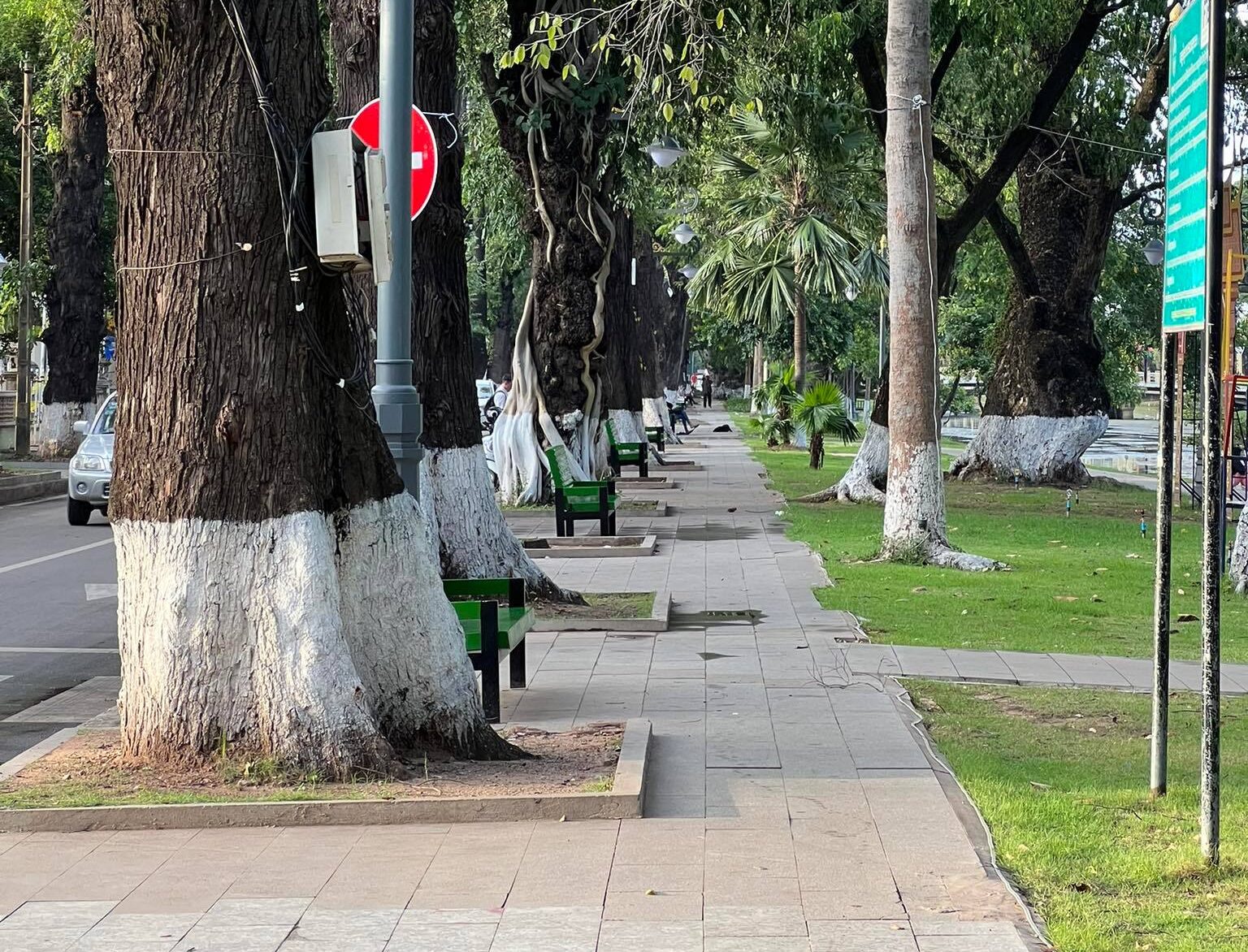 Before the 15th century, Siem Reap served as Cambodia’s ancient capital. And now Siem Reap is a highly popular cycling destination, thanks to our government’s construction of 38 infrastructure projects, including a road for vehicles and bicycles.

It is approximately 10 kilometers from the city center to Angkor Wat. Cycling to the north side of town along the Charles de Gaulle Siem Reap highway.

Where to buy the temple pass?

The ticket office is near the Angkor Panorama Museum on Siem Reap’s 60th road, from Jayavarman VII Hospital is 3 kilometers away. There are two options for purchasing tickets: online or at the booth.

Please visit the official website to get the most up-to-date information on the temple pass; we’ll merely show you the pricing for now.

Which temple should visit 1-Day By Bike?

Biking is mostly conducted in the early morning or late afternoon. Route destination small tour off-road 22-25km, with only 18km on the main road.

Noted: Distance above were started cycling from Angkor wat temple, not from the town.

The primary choice for seeing a majority Khmer enterprise created in the 12th century is Angkor Wat.

Devoted to the god Vishnu The world’s most famous temple, and the unique facing west in Angkor.

It’s located at the corner of Angkor Thom city, this temple is just by bike can exist. Motorcycles are not permitted. Great to the view of the village around, Chrung it’s the mean corner.

The temple’s function is to observe and defend against enemy attacks. The cycling is on the rampart 1.5km, it has on each corner, we recommended to go the southwest. 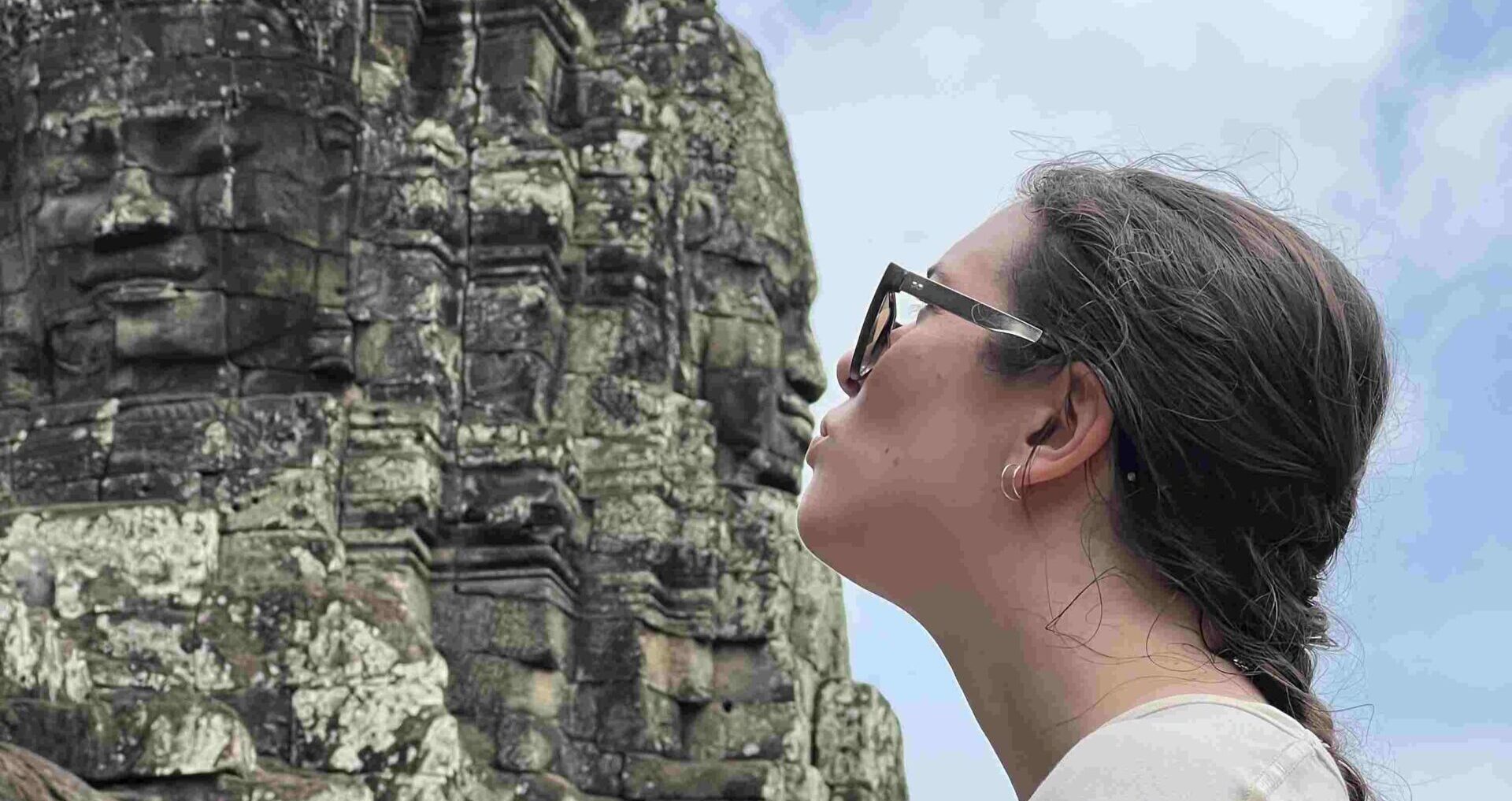 Temple located inside of Angkor Thom city, the state temple of King Jay7 is the powerful king who liberated our country from Champa.

The hidden gem on the trail to see the ruined temple in the jungle, that many tourists can’t see.

To go there tourists need to cycling in off-road, it was awesome always in the shadow of the trees. You could see many many things inside the forest. This is where the swing bridge was installed. 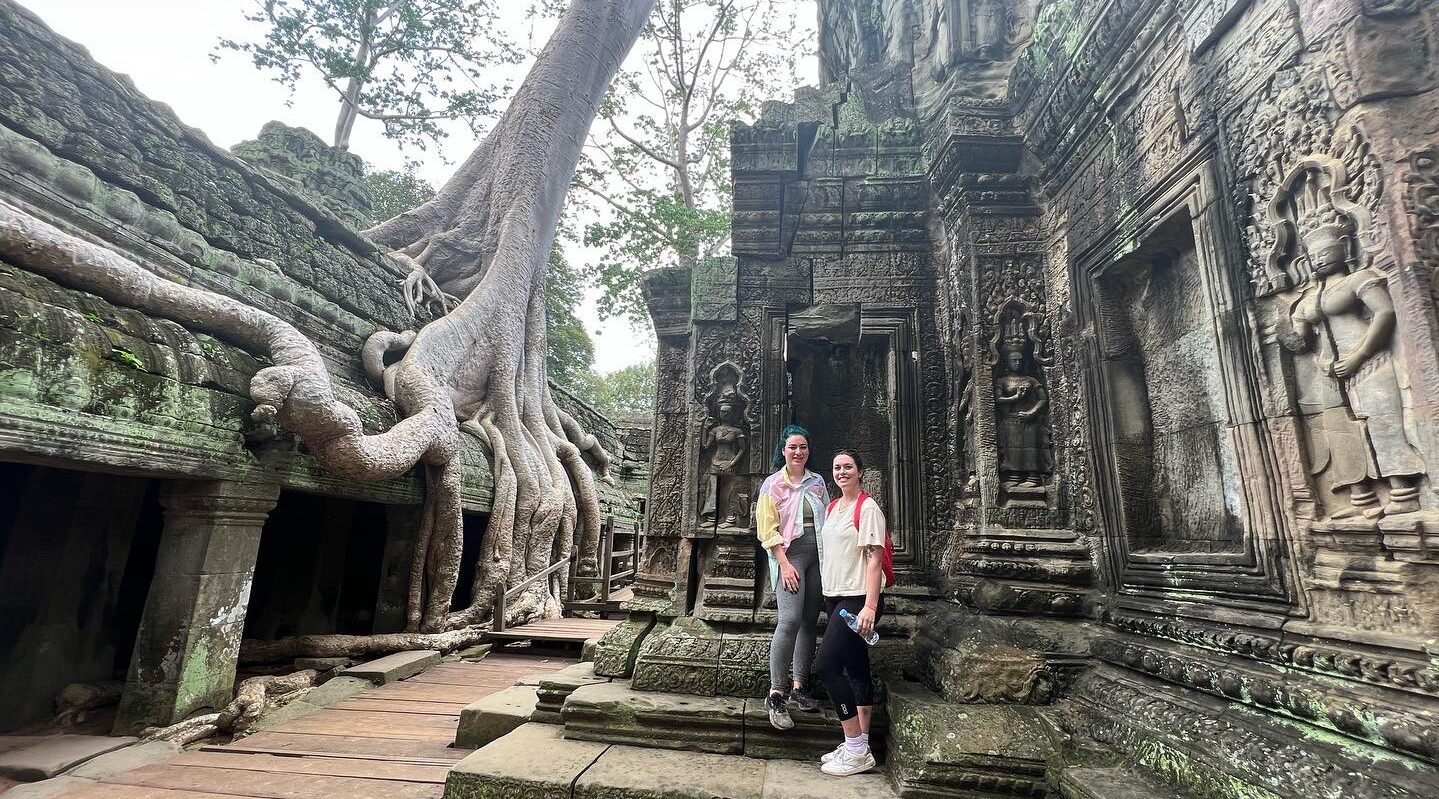 Begin your journey by riding to a breathtaking view of Ta Prohm, which has been preserved in its original condition. A beautiful root tree and a Hollywood film, Tomb Raider, with Angelina Jolie, were filmed here.

Does it have any wild animals?

A re-wilding project was conducted by APSARA National Authority and WILDLIFEALLIANCE. 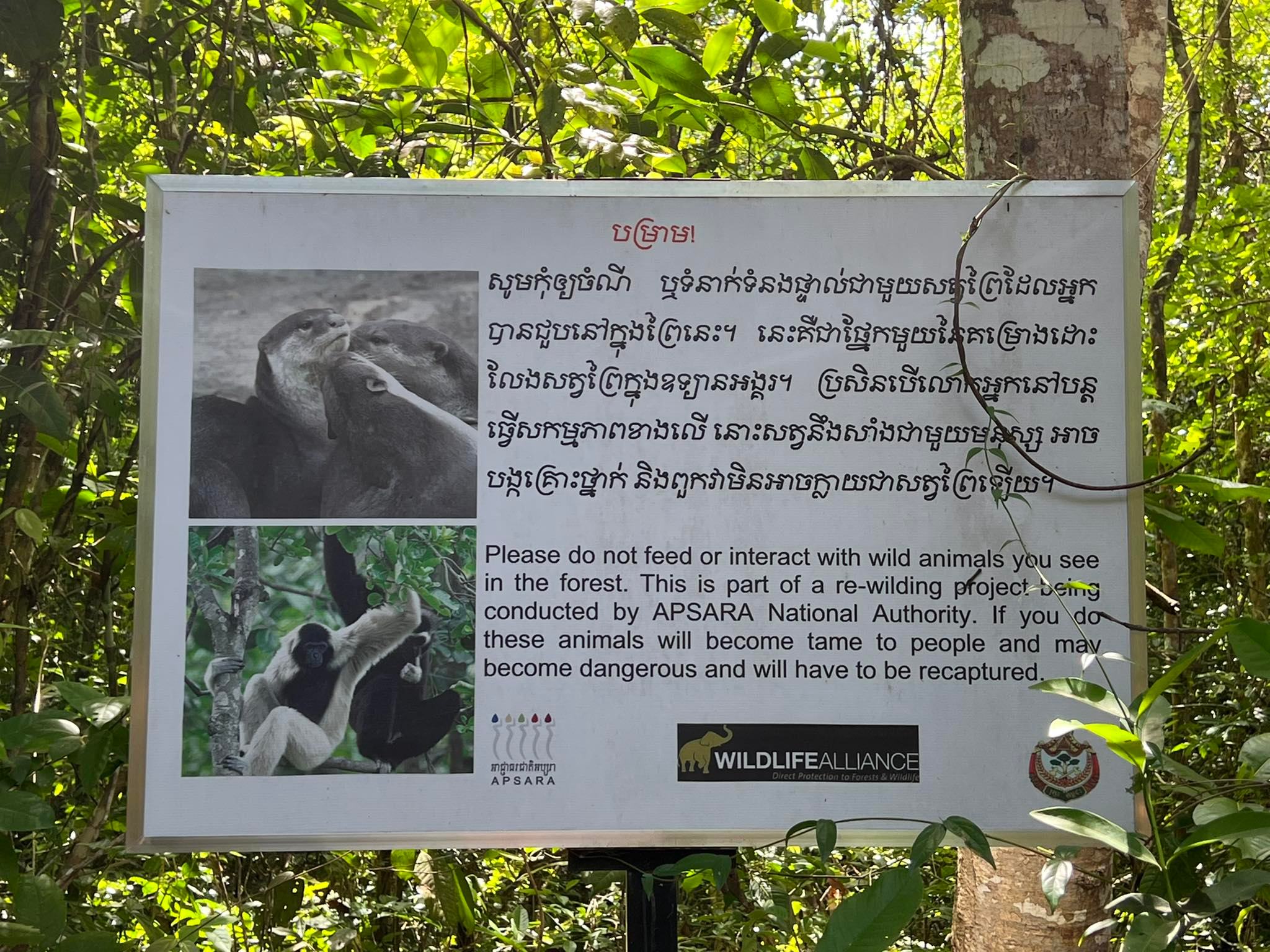 Do We need a tour Guide?

Yes, is the answer. to ensure that you are knowledgeable on the history of Angkor and all the specifics of the temples.

How to keep the bike any entrance of Angkor?

The bike could stay closed to any Angkor entry, but for security, it must be secured locked to a tree or any signs.